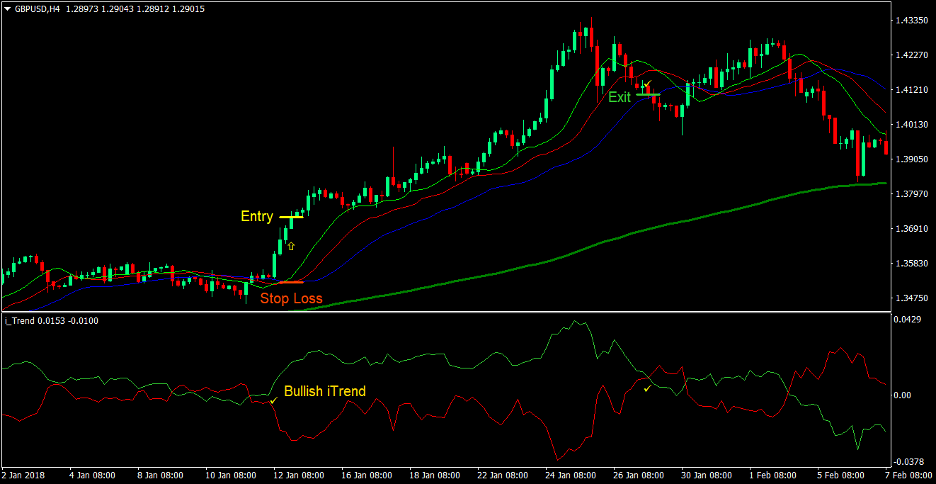 Bazirganiya bazarên forex dikare ji bo pir kesan tevlihev be. Ji bazirganên nû re nêzîkatiyên cihêreng ên bazirganiya sûkê têne pêşkêş kirin. Often these approaches not only differ, they also contradict each other. Trend following and momentum traders would trade pairs differently from mean reversion traders. Breakout traders would always have a contradicting view of the market compared to traders who trade on bounces off of support and resistances. Algorithmic traders have a different view of how to trade the market compared to price action and pattern traders. The forex market is a labyrinth of ideas. Different traders, different approaches, different views of the market. New traders often get lost in this maze of ideas. It is not uncommon to see traders who have more squiggly lines on their charts than a child could scribble. Lebê, this could sometimes be counterproductive. Carna, simplicity is much better than sophistication.

The Alligator Trend Forex Trading Strategy is a strategy that strikes the balance between simplicity and sophistication. It makes use of technical indicators in order to aid traders in making decisions, yet it still it does not go overboard by putting in too much in the chart. It allows traders to easily follow a trading plan instead of flooding traders with too much information.

The Alligator indicator is a trend following momentum indicator developed by the legendary trader Bill Williams. This indicator is intended to aid traders in navigating any trading markets through its phases, whether it is trending or chopping sideways.

The Alligator indicator is composed of three Smoothed Moving Averages (SMMA) set at five, eight and 13 demên. These parameters are based on a Fibonacci ratio, which Bill Williams found to work well based on his tests.

The iTrend indicator is a custom technical indicator which indicates trend direction based on momentum. It does this by plotting to lines on a separate window. The bands crossover each other whenever the iTrend indicator detects a change in trend direction. The lime green line crosses above the red line whenever it detects a bullish trend reversal, while the red line crosses above the green line when it detects a bearish trend reversal.

This trading strategy is a crossover strategy based on Bill Williams’ Alligator indicator.

Lebê, instead of taking every trade signal that presents itself, we will be filtering out trades that go against the long-term trend represented by the 200-period Exponential Moving Average (ZIKMAKÎ).

We will also be looking for trade setups that are in confluence with iTrend indicator as it also complements the Alligator indicator well.

Crossover entry signals generated by the Alligator indicator should be aligned with the 200 EMA and should be in confluence with the iTrend indicator. 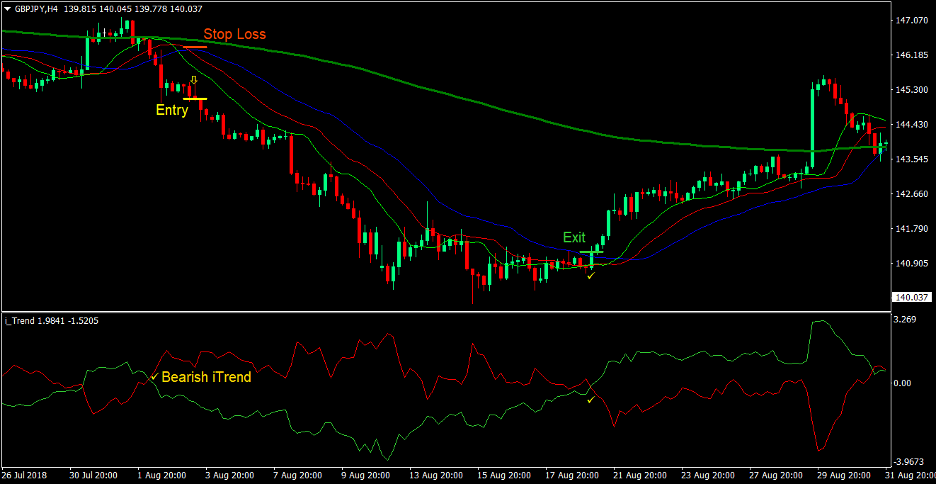 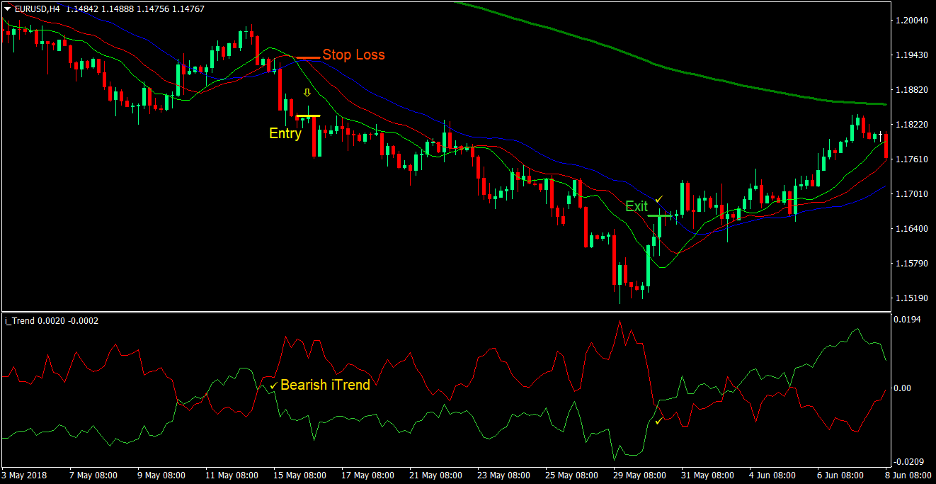 This strategy is an improved version of the standard crossover strategy based on the Alligator indicator, which is a working trading strategy.

This strategy is a working strategy that could rake in huge profitable trades. Using it with wise trade management skills would also bring in consistent profits.

Alligator Trend Forex Trading Strategy provides an opportunity to detect various peculiarities and patterns in price dynamics which are invisible to the naked eye. 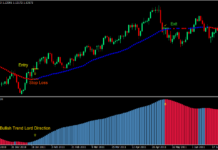